Badgers, their setts and dogs used to attack badgers receive legal protection from a variety of Acts:

Penalties include fines and imprisonment.   The Police have a variety of powers of arrest and rights of access to land or property under these and other Acts.

In essence, it is illegal to:

If you see suspicious activity at a badger sett, eg people with spades and dogs etc do not put yourself at risk, but please dial 999 and report it to the police.   Some forces have a Standing Operating Procedure in relation to badger related reporting and all forces are required to report wildlife crime to the National Wildlife Crime Unit where the intelligence is used to tackle badger-related crime throughout the UK.

Be very sceptical about any person claiming they have permission to  interfere with a badger sett, or describe the sett as a rabbit warren or fox den.

Land owners, foresters, land developers, subcontractors, individuals and the hunt etc. are all liable under the law.

Exceptions to this protection in law may be granted by applying to Natural England for a licence.  Examples include where a sett has encroached under roads etc, or when a sett has been attacked and work needs to take place to repair it, or during land development.

Owners should have their dogs under close control anyway, but if a dog does enter a sett and gets "lost" or "stuck" – owners cannot take matters into their own hands and dig into the sett.  It is illegal.   Time – possibly overnight - should be left to allow the dog to find its own way out when the badgers have left to go foraging.  The sett should be left in peace to allow the badgers to do that.   If you don’t, you risk all animals underground staying put which makes the problem worse.   The police and fire brigade should not facilitate a “rescue” without taking proper advice.

Individuals use a spot light (either hand held or on a vehicle) to pick up animals in the dark, using a variety of dogs depending on the intended victim(s) - deer, hare, fox, badger, to chase, bring down and possibly kill their target.    Please report the location of any unusual activity at night to the police, if you can make a note of vehicle registrations or take a photo so much the better.  This activity also risks the safety of farm animals who get caught up in the mayhem along with damage to crops and fencing etc. 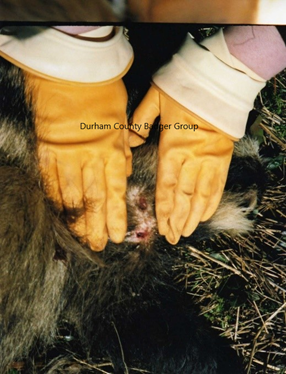 Damage to a sett

Please report any damage to setts to us [email protected]

If the damage is very fresh, please also consider the area as a scene of crime and inform the Police on 101.

"Party" on a sett in Durham Recklessness during timber extraction or other ground work causing damage or the destruction of a badger sett is liable to prosecution and for a company found guilty of recklessness, the fine is unlimited. There is a persistent issue with mountain biking across setts throughout the north east.  The official biking trails will have already been surveyed for wildlife/habitat considerations (and we have been involved in some of these) should be ok for badgers – the main problem is when bikers take it upon themselves to damage woodland and use badger setts and badger paths as a route, sometimes re-profiling them to make better jumps etc  – this is a crime and should be reported to the police - a landowner cannot give permission to interfere with a sett.

Their activity also risks damaging fragile flora on the woodland floor - along with the damage caused on public footpaths and in nature reserves.

Mountain biking over setts, including the removal of trees! 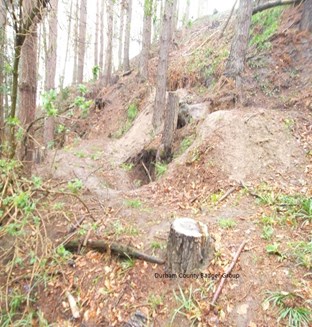 In the 21st Century! people (not just men) take part in and organise fights between dogs and badgers.   They also gamble on the outcome of these fights.    They also trade in badgers and fighting dogs across their network.

Damage to a sett indicating possible removal of badgers for badger baiting, includes holes  dug above the sett entrances to try and access the chambers and tunnels.

Dogs used in the sett may be wearing a radio collar to help the handlers locate the badger underground before they start to dig in.

Digging into a sett involves quite a bit of effort and event planning (often using social media).  These people travel the country to fight and trade badgers and dogs.   It is not just local hooligans who take part, it involves serious criminals who are also involved drugs, violence, robbery, slavery etc.

A great deal of money by gambling on fights or trading in badgers or dogs is part of that culture - much the same as dog on dog and cock fighting.

The additional link between animal and domestic violence gives an indication how evil and cruel these people are and the RSPCA, Social Workers and Police Officers will be mindful of that when attending incidents. The dogs used are put up against a frightened badger which can inflict serious wounds before dying.  The injuries inflicted on the dogs are never treated by a vet.

Please report any unusual activity to the police.   If you come by names of people involved in this evil crime please pass on the names or other information to the police, Crimestoppers, Naturewatch Foundation, RSPCA etc.   The National Wildlife Crime Unit collates and uses this intelligence to focus investigations and hopefully leads to  prosecutions and the confiscation of dogs.

https://naturewatch.org/campaign/badger-baiting-in-the-uk does a great deal of work monitoring social media - so please report anything you spot online relating to badger baiting or similar to them.

The following photograph shows a badger leg in a hole which was the result of a baiting incident where the individuals filled in the dug out sett so that to the casual observer the field was undamaged.   The farmer found it when he noticed his pregnant cows had obviously been disturbed and checked over his farm. 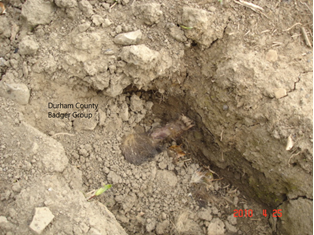 Dead badger on the road side

Please report all apparent RTAs to [email protected] with the exact location so that we are able to monitor any longer term issues.

Usually, the local council cleansing departments quickly remove the bodies.  We do not have the resources to collect and dispose of RTAs.

Badger (injured or not) found above ground during the day

Leave well alone as badgers are very likely to protect themselves if they feel trapped.  Call the RSPCA on 0300 1234 999 for advice.   An adult badger may have been “caught out” and will just lay up until the evening.  A cub may have become lost/separated when foraging and it is usually appropriate to leave it so that it can pick up with the rest of the clan during the following evening.   If it looks injured, underweight or unwell, call the RSPCA.   Durham County Badger Group does not currently have the facilities to collect, care for injuries or to rehabilitate badgers.

Badger caught in a snare

If the badger caught in a snare is still alive, please call 999 and report to the Police and the RSPCA.    Things to note:

A Vet could also be contacted to prevent continued pain and suffering as snare wounds can be very serious by affecting the tissue under the skin.

Photo is site of a snare sett on a badger run, where the badger has fought its way loose, only to die nearby. 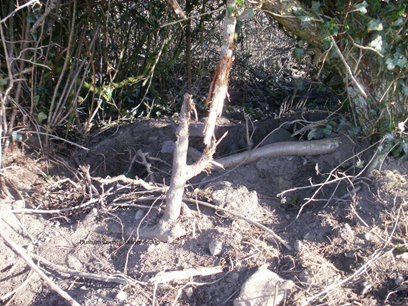 If the badger is dead, please report to the Police and [email protected].org.uk, sending photographs of any snare in situ which is very useful evidence.

Durham County Badger Group opposes the use of all snares.  As it currently stands it is illegal under the Wildlife and Countryside Act to:

Sadly, "free running" snares set for other quarry which are not set on a badger paths/sett are legal.   Check out the anti-snaring campaign website for pictures of snares and more information.

Ironically, removing or destroying a snare could leave you liable to prosecution for theft or criminal damage so please contact the police about any snares you believe to be illegal.   We advise pulling the snare closed in situ so that it can’t trap anything.   Please also contact us with the location details of any snares you find.

A badger found dead on a sett is relatively unusual (excluding snares or baiting).  Sometimes a badger injured on the road will try and make it back to the sett.   Or it may have picked up some poison whilst out foraging or by a deliberate act.   If you suspect the latter please do not put yourself at risk by handling items/animals or getting too close.  Report it to the police/RSPCA (with exact location) and they may arrange for it to be collected for testing.

A note of warning to anyone who decides to try and photograph badgers at their sett.   This very much risks disturbing them unless a great deal of preparation is carried out over a number of weeks/months even.   If the sett is already under stress (eg during a drought), something else going on at the sett could prevent them from doing what they need to do.    It is a criminal offence to disturb badgers at their sett and a photographer has been prosecuted for the offence.

Badgers in your garden    http://durhambadgers.org.uk/media/1514/badgers-in-your-garden.pdf